MOTHER OF THE BRIDE…. AND CELEBRANT TOO. 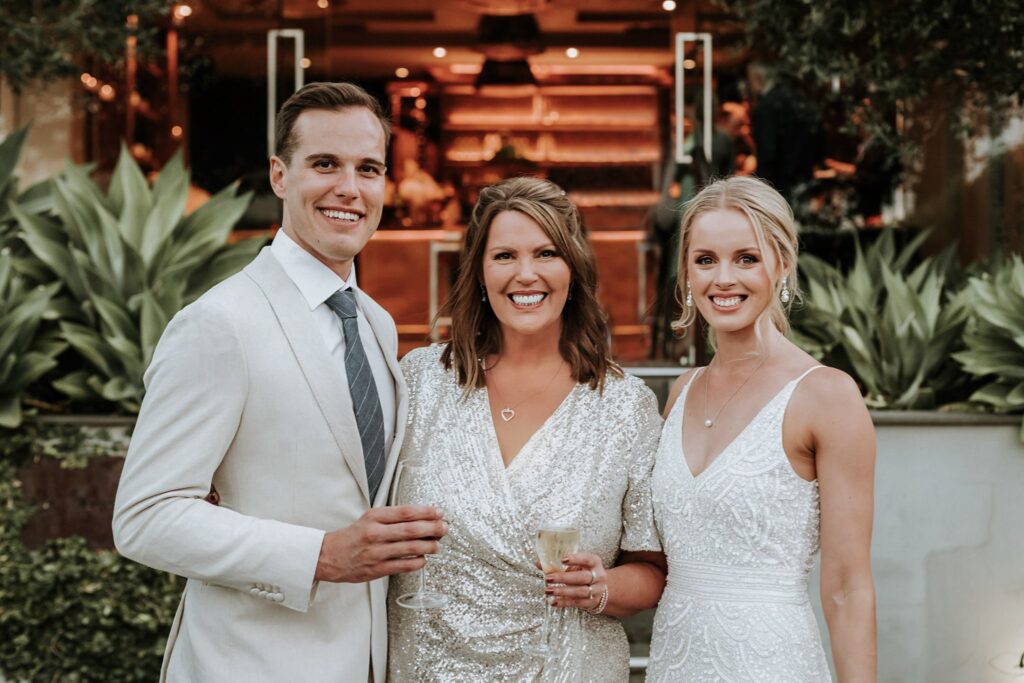 Lisa Newman is a Melbourne based Celebrant whose smile is as big as her hugs!

When she spots you across a room, you are almost instantly drawn into a sequined one-armed generous hug… the other hand is quite rightly holding a glass of something bubbly and delicious.

It’s this type of generous multitasking that makes Lisa the much-loved Celebrant that she is.

However, even Lisa’s multitasking skills were put to the test when her daughter became engaged and asked her Mum to be both Mother of The Bride AND Celebrant.

As Lisa told me, she was ‘over the moon’ when her daughter, Cassandra and partner Andy, asked her to be their celebrant. Of course she did immediately wonder if they knew she would do an excellent job, or they just wanted to save some money…..!

As Celebrants, sitting down to write a couple’s ceremony, to tell their story and set the tone for their Wedding, is our most important job. So, I can only imagine how much stress Lisa put on herself to make this ceremony her best ever.

And it did prove to be challenging…! Lisa said “I didn’t know how to take my celebrant hat off and put my mum hat on”. After reaching out to some of her Celebrant colleagues for words of wisdom and advice, she found the words to ‘kickstart’ the writing process and she was off and writing…!

I happen to love getting my couple’s questionnaires back and learning all about their love story and them as a couple so I was curious, as a close family, did Lisa learn anything new about her daughter and her future son in law in the process of planning their ceremony?

Lisa responded with a hearty YES! She said that “as you socialise with your kids and their partners, you get a snapshot of their relationship. However, getting their questionnaires back revealed much more about their relationship.”

I love that Andy, Lisa’s future son in law, was happy to share his feelings about Cassandra and their lives together, with his future mother-in-law!

Lisa told me that ‘I felt really privileged to read his answers.

Cassandra and Andy opted for a first look which Lisa still gets choked up with emotion thinking about! She’s also watched back the video of them reading their vows many times and still sheds a tear.

Being in Celebrant mode in that moment on the day you don’t always ‘hear’ the vows. You are mentally preparing yourself for the next moment to come.

Having the video to look back on, means Lisa is enjoying that moment in a different way to what she was on the day.

Of course, including Mums or other family members is often a very important part of a couple’s ceremony.

I asked Lisa how she felt Mums would like to be included…. “The stock standard suggestions would be either a reading, ring bearer or witness.  In our case, I suggested that Andy’s mum stand up and give them advice going forward in their marriage.  She was chuffed to be included this way.”

Having a professional on the Wedding Planning Committee meant that Lisa could help Cassandra and Andy include both their Mums in very meaningful ways in their ceremony. Using their own words to share their wisdom and love on the day.

As the photos show, Lisa was clearly in her element! Draped in sequins, with that beaming smile as she was honoured to be both Celebrant and Mother of the Bride.

As a Celebrant Lisa KNEW that she was the best person to marry Cassandra and Andy. She also KNOWS that it was one of her very best ceremonies.

However, she’s also acutely aware that her most important role on the day was that of Mum. As Lisa told me “Being their celebrant was exciting, a privilege and emotional – but it was also a little daunting being in celebrant mode with all our friends watching on.”

Wanting to make Cassandra and Andy’s ceremony SO special, in some ways overshadowed, Lisa being present as her daughter got married.

On the flip side, could she really have let go and NOT been the Celebrant?

And, personally speaking, can you imagine the pressure of being the Celebrant for a family wedding of a beloved and trusted colleague….???

I firmly believe that Cassandra and Andy made the right choice in having the effervescent Lisa as their Celebrant, but as Lisa says, ‘I honestly think that I would have preferred to be part of it, observing and not having that pressure of trying to be the best celebrant I could be.  That’s kind of hard for me to admit and maybe it’s easy to say now that I have actually done the ceremony.  Of course, I would have been shattered had they not asked me.

So, to coin a phrase, it was kind of like a double-edged sword.”

As Celebrants, we all fall in love a little with our couples and only want to see them have the most brilliant day, and that is exactly what Cassandra and Andy had.

Of course, Mums often do and most times should have the last word so, Lisa,

“Overall, hands down it was a brilliant day and so lovely to see them so happy, so deeply in love and it filled my heart to watch them.”

Thank you Lisa, Cassandra and Andy, for sharing your day with us.

Now, this is a very creative family! Cassandra did all the florals and styling herself,
and even did her own make up on the day.
Lisa has spent much time reflecting on this joyous day by editing the photos herself.

Want to find the perfect vendors to help create your dream wedding?

Dee Wild is a member of the queer community, a maker of dresses and a lover of Prosecco.
Dee is also a Melbourne based Marriage Celebrant and a Local Leader for The Celebrant Society for the state of Victoria.

Melbourne’s northern suburbs are where she calls home, with her lovely English partner and two rather large dogs. When not hanging out with her couples in local bars, creating ceremonies and helping loved up couples get married, Dee loves exploring local cafes, handmade markets, vintage stores, restaurants and craft beer establishments.

WE ACKNOWLEDGE THE TRADITIONAL CUSTODIANS OF THE LANDS WE LIVE AND WORK ON & PAY RESPECTS TO ELDERS PAST, PRESENT AND EMERGING.

The Wedding Society is a thriving community of innovative, fun & inclusive wedding vendors, all working together to push the limits of tradition and deliver kick ass weddings to amazing couples so that you can have the Best. Day. EVERRRR!!