HOW TO INCLUDE YOUR CHILDREN IN YOUR CEREMONY? 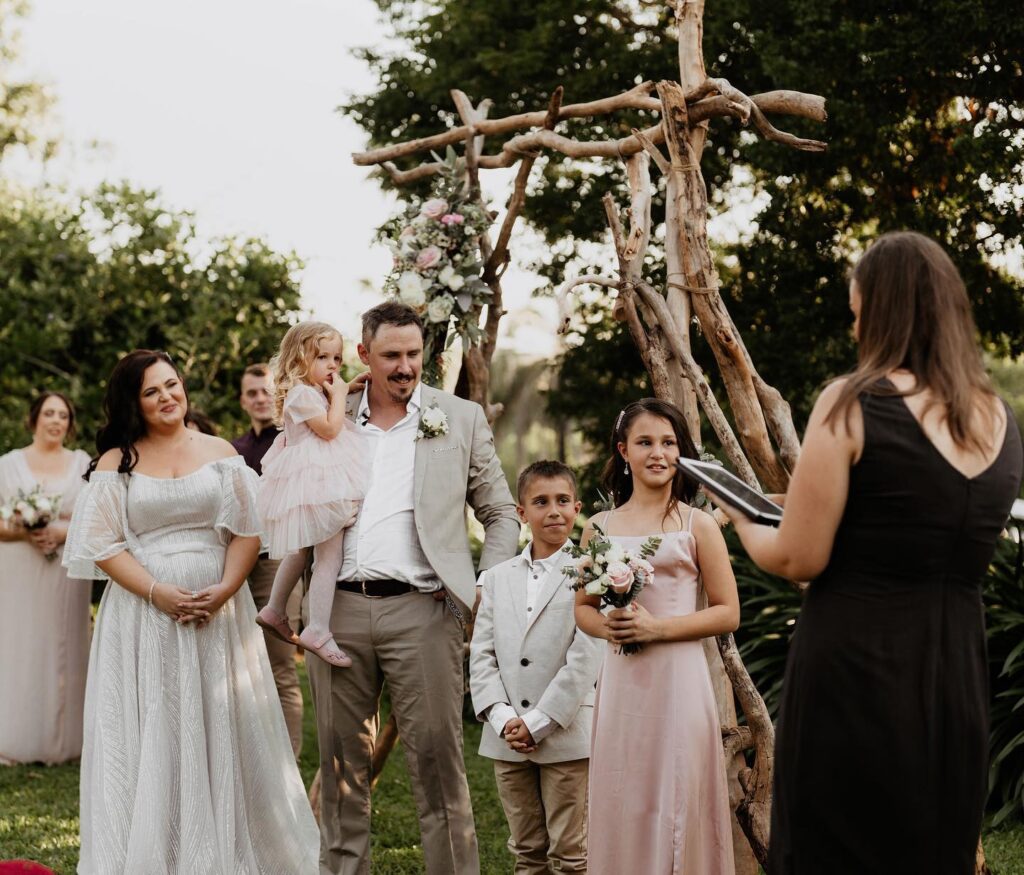 We love a bit of a stalk on the many wedding planning Facebook Groups there are, and know that one often hotly debated topic when planning a wedding is ‘Should we allow kids to attend’.  And we’re not here to tell you what to do when it comes to this as we see both sides of the debate.

But what do you do when you’re the couple getting married, and the kids are your kids?  How can you include them in a way that makes them feel like they’re part of the moment.

Now, this is a question we get asked a lot. And, of course, there’s the more obvious ways such as  including them as flower girls or ring bearers – which we love – we mean… who doesn’t love seeing a cutie-patootie, all dressed in their best, often going a bit off script as they walk/stumble down the aisle?!

However, over and above that, what are some other ways to include the children in the ceremony so they feel like they’re part of it all?  Well, we’ve put together the brains of The Celebrant Society to share some things they’ve seen work within a wedding ceremony.

“I had a gorgeous couple and their boys who were avid lego lovers! And they dreamt of a ceremony that would unite them in love and family. A ceremony that would combine their love of lego and their family unit. It seemed only fitting that they would have a unity ceremony, but it wasn’t going to be with candles and it wasn’t going to with sand… it had to be a Lego Unity Ceremony!” Kerri Watkins Celebrant

When it comes to choosing who is going to go first with the personalised vows, our members have done things like ‘rock, paper, scissors’.  But if the couple have a child, or children, why not ask the kids to play a game of flip the coin to see which of their parents says their vows first, as suggested by  Stacey Morris Celebrant ?

Children love being given choices within the ceremony.  It helps them feel involved, and gives them a say, however small, in what is happening.  For example, our member Just Hitched by Jacinta had seven children come down the aisle as flower girls/page boys, and they all carried a flower of their choice.  Once the bride arrived, they tied all the flowers together to make the bride’s bouquet.  Pretty cute, huh?!

Ange B Celebrant told us that “I often get the kids to join the parents in a little family huddle while they make a commitment to the whole family.  It’s very cute and makes for a pretty special photo.” We agree – we love this idea and having the family all together during the ceremony (often with a hug or two) can be a real highlight.

After the ring exchange, parents can give the children a present, such as a piece of jewellery, a book, an heirloom, or as Emma Louise Homewood suggests, “A fancy compass makes a nice gift, so the child can always find their way home”.

What about something which can be kept and displayed in the house?  Jacky Walker Celebrant told us that “I have a couple who have two kids each and are doing a puzzle together while I saw a few words about how they are all going to behave and be good teenagers!”  You can purchase personalised puzzles on Etsy

Lisa Laker, Marriage Maker did a water unity in one of her ceremonies.  “The couple both spent many summers on the water growing up.  Brit was raised on the Murray River, Ryan on the Gold Coast, and now their daughter spent her first year of life by the beach in Darwin.  These three destinations have a special place in their hearts, and so they chose to combine bottles of water which had been collected from their respective hometowns .” PHOTO BY: Unveil Films Photography

Let us know some of your ideas for including children in your wedding ceremony – we’d love to hear them!

Want to find the perfect vendors to help create your dream wedding? 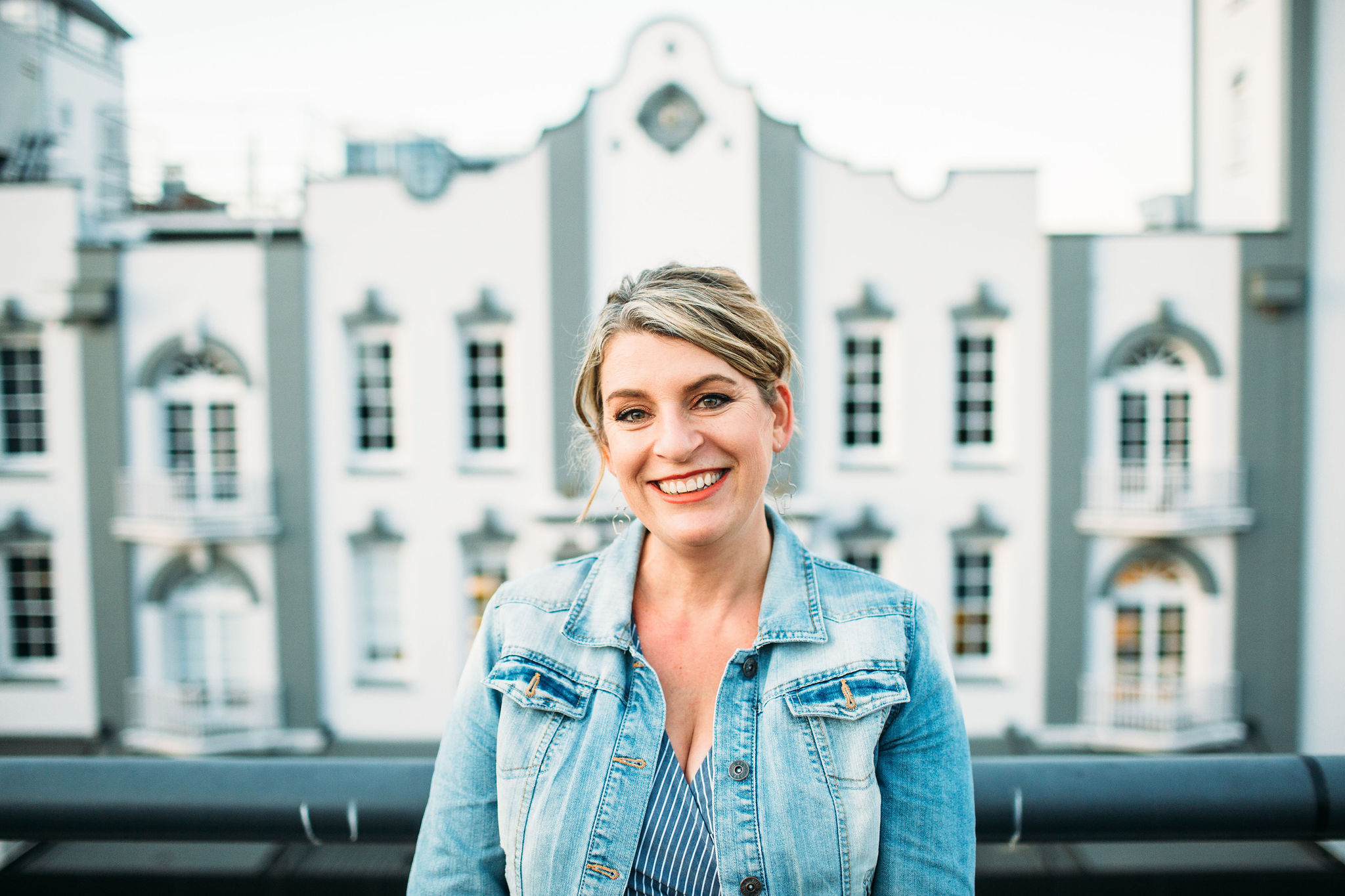 Roxy is a dog-loving, wine-sipping, vintage-hunting Celebrant, and the Queensland Local Leader for The Celebrant Society.
Having started her celebrant career in 2011 in the UK, where she lived for 26 years, Roxy has a hybrid London/Australian accent that confuses almost everyone she meets (‘Are you New Zealander?’).  She lives on the northside of Brisbane with her yeasty-smelling rescue-Staff X, Valentine Mc Farty. In her spare time, you can find Roxy out on her bicycle, scouring op-shops for vintage bargains, down her local bowls club where she hosts a trivia night, or hanging out in her garden, trying hard not to kill anything.
More Info
PrevPrevious blogNOW I’M MARRIED… HOW DO I CHANGE MY NAME?
NextWHAT’S IN A VOWNext
CHECK OUT OUR ULTIMATE BUSINESS SPRING CLEAN COURSE!

WE ACKNOWLEDGE THE TRADITIONAL CUSTODIANS OF THE LANDS WE LIVE AND WORK ON & PAY RESPECTS TO ELDERS PAST, PRESENT AND EMERGING.

The Wedding Society is a thriving community of innovative, fun & inclusive wedding vendors, all working together to push the limits of tradition and deliver kick ass weddings to amazing couples so that you can have the Best. Day. EVERRRR!!